Sacred Sites - Our Topic of the Month!


2 replies to this topic

I just returned from the Andes Mountains in Peru. I experienced the culture, the Peruvian winter, met some wonderful people, and got to cross a big item off my bucket list: explore Incan ruins and sacred sites--especially Machu Picchu. 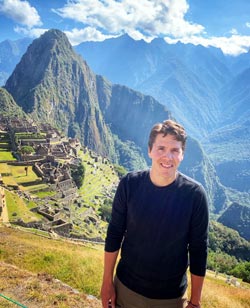 A site doesn’t become sacred overnight. First, a place has to exist. Then it must be considered an important place by multiple people. The importance turns to reverence. As if the site itself offers some direct connection with God or gods. Add in an element of fame, where the reputation of the site grows far beyond the locals, and you have a sacred site.

When I touched down in Peru two weeks ago, I assumed Machu Picchu would be the grand prize of my trip. That would be the most sacred site, simply because it’s the most famous. Don’t get me wrong, the site is sacred to Peru, no doubt. Considering the hordes of people I encountered, and knowing roughly what they paid to enter the site, this place is a sacred cash cow for sure. But religiously speaking, it was not the most important place to the Inca people.

Machu Picchu is famous because it’s so well preserved. In short, when Spain landed in Peru in 1532 with the intent of conquering its people, they destroyed all of the buildings and sacred sites they could. They wanted the locals to have no reminders of what life used to be like. Spain destroyed Incan temples, and their gods. Why not Machu Picchu? Because it was sitting on a mountain top, with one road in. A road the Inca destroyed and hid during their retreat from the city.

Spain never found the place, and it was almost forgotten, save for a few local villagers who had no use for a bunch of stone ruins. When American adventurer and explorer Hiram Bingham arrived in 1911 looking for the lost city of the Incas, the villagers shrugged, and one young boy led him up the hill to the ruins. I can only imagine that once the boy got close to the ruins of the city he pointed, and in the local language of Quechua said, “Knock yourself out, dude.”

Hiram Bingham did indeed knock himself out. Though this wasn’t technically the “Lost City of the Inca,” he know how to make it sexy to the world. He took pictures, he excavated, he published a book, and there I was just about a century later paying 140 Soles to walk around it for a few hours.

The most sacred Inca site is actually located near the center of the city of Cusco. The temple is called Coricancha. The construction is so precise with interlocking masonry that you can’t stick a needle between the blocks (a fact every tour guide is quick to point out). There’s no mortar or duct tape holding these blocks together, just enough precision to survive half a millennia of earthquakes, rainy seasons, and wars.

Coricancha’s walls were once covered in gold and golden statues adorned the courtyard. Gold, to the Inca, was merely decorative. To the Spanish, it was everything. When Spanish conquistadors raided Cusco, they took the gold, they destroyed much of the temple, and then built the Santo Domingo church using the Inca stones for the foundation. They tried to cover over the Incas, but thankfully, they’re still there underneath holding up the entire Catholic church and convent.

I got close to some of the old Incan walls. Close enough that the results of the Spanish conquest vanished from my sight and I was left face-to-face with the Incas of the 16th century. I smelled the stone blocks. I touched them. I connected.

Thankfully, all of the Inca were not wiped out. Today, their descendants still walk the streets of Cusco. They still tend to the buildings of Machu Picchu. Some of them still speak Quechua. When I walked through the grounds of these ancient temples, I could almost feel the rhythm of ancient drums. I could hear the voices of people who were incredible builders able to construct something that outlasted their short empire. In short, I understood the power of a sacred site. I was a pilgrim along with thousands of others who traveled far to be able to say I was there. I traveled there to try and connect with something bigger than me, and I accomplished exactly that.

Enjoy the rest of the newsletter below!

Well worth the trip!  Was there in 2016, saw many of the sites.  I took the train to Aguas Calientes the day before.  If you go also take in the Salt mines at Maras and the Inca ruins at Moray.  Then take a flight over the Nasca Lines and the Aquaducts as well as the Temple of the Sun near Pachacamac.  And for another aspect, visit Paracas, and a boat ride out to the Ballestas Islands, sometimes referred to as the poor man's Galapagos..  The place has millions of birds as well as other animal life.

Enough people get together over a period of time all generating the same thoughts and energy will create a Thought Form. The Form takes on the shape of what those people were praying for and about. Good or Evil. You can feel the Good ones when visiting ancient churches and other holy places. I hope you never come across an evil one.

Back to The Investigation - Message Board of the Month