Connecticut’s Old Leatherman
The following is an excerpt from a feature I’m working on to add to the Ghostvillage.com Legends section.

Since 1862, many have heard the tale of a wandering vagrant who traveled in a 365-mile circle between the Connecticut and Hudson rivers. The strange man only spoke with grunts or gestures and dressed in crudely stitched leather from his hat to his shoes. The suit was made of heavy pieces of raw leather—estimated to have weighed more than 60 pounds in total. It was a coat of armor the vagrant depended on to protect him from the sometimes harsh New England elements. “Leatherman” as he was dubbed by those who encountered him, would only sleep outside — year-round — and mostly in caves around Connecticut and New York.

A wandering vagrant is nothing surprising — American folklore has more of them than could fill a thousand railroad boxcars. What makes the Leatherman unique is his incredible precision in daily routine. He would arrive in the same location every 34 days.

Many different families took it upon themselves to feed the Leatherman. Since he arrived at precisely 34-day intervals, and at the same time of day, some families would have a meal prepared for his arrival. The Leatherman always grunted or made appreciative gestures and then quickly moved along to keep his tight schedule.

The Leatherman was first seen in Connecticut in 1862, and all who encountered him wanted to know who he was and where he came from... 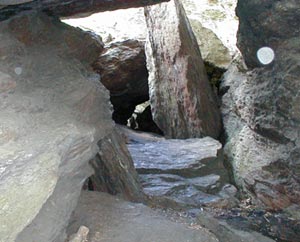 A photograph of the Leatherman, taken from The Lure of the Litchfield Hills magazine, December 1952. This picture was taken in Leatherman Cave in Watertown, Connecticut, in June 2001. Notice the large and very pronounced orb in the upper-right corner.

Watch the Ghostvillage.com Legends section for more on the Leatherman. Coming soon...

Seeking Fellow Ghost Hunters!
There are many active ghost hunting organizations around the world, and almost all of them welcome new members. In the Ghostvillage.com message boards, there is a section for people to post information about their existing group or to look for others in your area to start a new group. In recent months people have posted actively looking for members in the following areas: Connecticut, North Alabama, Pittsburgh, Seattle, Massachusetts, New York, Colorado, Oklahoma and Northern Texas, and Ohio. Click here to see the posts and respond directly. If you would like help organizing your group or recruiting new members, drop us a line and we can include some information about your organization in the next newsletter.

About a year ago my sister was painting her room, I had been gone for the week and she decided to sleep in my room (because of the paint fumes). She woke up in the middle of the night because of a rain storm. She spent a few minutes looking out the window and when she turned around she saw something in the hall. She describes it as a small man standing in the hall very close to my door. She did not see the face but was very sure that the figure was a human shape. He was just standing there, after a few minutes (which she says felt like an eternity) he began to lift his arm and point at her. She says that she's sure it was not something in the hall that just looked like the shape of a person, because it was moving the way a person would if they were holding up their arm. She was so scared (and my sister is not one to scare easily) that she covered her face and hours later fell back to sleep.

I have never seen the figure but I have always felt a presence in my house. I've heard whistling in the hall in front of my room and many other things have happened in my house. But lately I've been waking up in the middle of the night feeling like there is someone in my room. I haven't seen anything but I still have the feeling there is someone there.

I would love it if anyone had any suggestions as to what it might be. Thanks.

Ghostvillage.com Quick Stats:
3354 Messages in the Town Square Message Boards
14 "Encounters" listed so far this year.
154 Paranormal Web sites in the Ghost Search directory
207 People have signed up for free Ghostvillage.com G-Mail.
521 Subscribers to this newsletter.

Remember, this is your Web site! Your input, ideas, photographs, recordings, and experiences are welcomed. Please email us anytime at info@ghostvillage.com.

REMOVAL INSTRUCTIONS:
To be removed from the Ghostvillage.com mailing list, please respond to this email with the word "remove" in the subject line. You will be promptly removed.