The first time we went to Waverly Hall Cemetery we took some pictures and had captured a few shots of orbs. On our second visit we were taking pictures around 11:45 PM and I said, "This is the last picture I am going to take and then we are going to leave you all alone. So anyone that wants in this picture needs to get in it now." I counted one, two, three, and took the picture.

I didn't feel well right after the picture was taken and my daughter wanted to walk around some more and see if we could get a recording. I told her we needed to go as I was feeling sick. My mouth was watering like I was going to throw up, my stomached began getting the heaves, and my legs felt weak. I thought maybe I was just getting too warm (we live in Georgia) so we left.

It took me about a week to get the pictures developed and when I got them back I was looking for orbs, etc. I passed this picture up the first time and decided to go through the pictures again. When I did, this face just jumped out at me! (Right between the two heads of the people in the center of the picture.) My daughter then reminded me that after this picture was taken was when I got sick. This has really spooked me! I don't know what this is or even if it's real. I didn't see anything when I took this picture. Of course it was dark and that's why my kids are so blurry, because I had nothing to focus my camera on, I just hoped at the time it was focused. 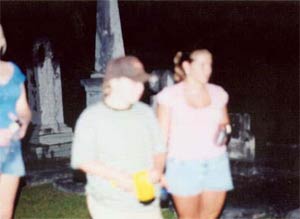 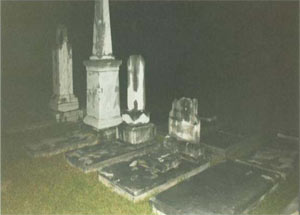 I took these photos with a Minolta 35mm camera and used Kodak 400 speed film. It was rather warm, probably in the mid 70's that night. I had found Waverly Hall through a Web site stating that this was a paranormal hotspot. I have since been in touch with several people via email who are trying to find pictures of the people that are buried in the tombstones that this apparition appeared on. So far they have found a picture of relatives houses but not pictures of them nor their home. I am really excited about this picture as I was not expecting this at all.