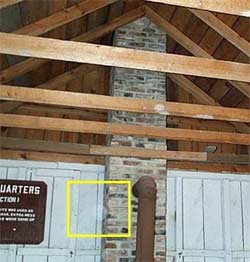 (Added November 16, 2001) I took this picture on Veteran's Day, Monday, November 12 2001 inside the officer's barracks in Fort Lincoln, Maryland. The area where I took the picture was built by Confederate prisoners during the Civil War in the 1860s. Every time I visit that area I have a heavy feeling on my chest -- I can't explain it but it sure is weird. There is also a lighthouse down the shore from the fort and it is also haunted. Unfortunately you can only get in the lighthouse once a year for an open house, since it's owned by the Navy. The whole area has so much history and has many haunting experiences. Thankfully I live 20 minutes north of the park so I can visit as often as I like.

The picture was taken with a Kodak DC240 digital camera.