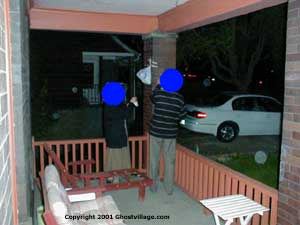 This picture was taken on the front porch of the house I was staying at in Pittsburgh, Pennsylvania. The couple in the picture were taping plastic bags to the brick column to try and keep a cat from getting to the bird's nest at the top. I thought it was a funny scene so I clicked a picture. To my surprise there were five orbs that appeared in the picture. Two that may be hard to see are located on the car and faintly on the man's back.

Blue dots were placed over the couple's face to protect their privacy. I used an Olympus D-360L digital camera, set to medium resolution. The time of the photo was approximately 9:30 PM EST and the weather was clear and cool (approximately 50 degrees).