The Man at Birdcage Theatre 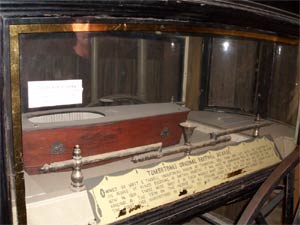 On November 11th my wife and I toured the Birdcage Saloon in Tombstone, Arizona. It is known as the most haunted spot in Arizona. During its first nine years in business there were 26 murders committed inside. This was the hangout for the likes of Wyatt Earp and Doc Holliday. If you saw the movie Tombstone, then you will remember the Birdcage. In the rear of the Birdcage they have the original Hearse, called the Black Moriah, which was used to transport all cadavers to Boot Hill. My wife and I were alone in the building and I was snapping shots randomly. I snapped a shot of the Hearse and upon download to the computer, this face appeared in the reflection.

A couple of things about this photo. It is currently being examined by a Canadian film crew and has already been examined by a paranormal research group in Canada called HAPIA. HAPIA believes the photo to be authentic and has given it to the film crew for further inspection.

If you zoom in on "his" right eye you will see that it is extremely large and you can even make out the pupil. He appears to be wearing a Henley type shirt, however, according to HAPIA there are in fact no shoulders! The lower right portion of the face appears to be behind the pipe which is behind the hearse.