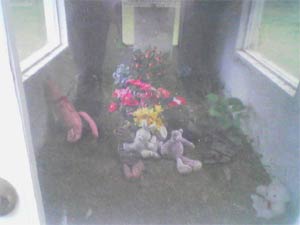 A friend and I were bored last weekend so we decided to go exploring in the area around Jackson, Tennessee. We went to Hope Hill Cemetery in Medina to see the Dollhouse. The Dollhouse is the grave of a 5-year-old girl, named Dorothy Marie Harvey, who died in 1931. A dollhouse was built over her grave, and local legend has it that if you look inside the dollhouse sometimes you can see her. Upon sighting the cemetery, I got an eerie feeling right away. The only two colors that seemed to be present were the green of the grass and the gray of the tombstones. We went into the cemetery and started toward the dollhouse. About then, some old guy came racing down the cemetery road and told us to leave. We hid in the woods until he left and then went back. The cemetery is open to the public and we were there during its "open" hours. Upon our return, that eerie feeling came back. We went up to the dollhouse, looked around it and in it, took some pictures, and then my friend and I both got a feeling that we should leave. We did quickly.

I didn't see anything while I was there, my encounter occurred a few hours later. While looking through the pictures later, I saw nothing, and then I opened the last picture I took of the inside of the dollhouse and there she was! The hair stood up on my arms and my whole body tingled. In the photo is what looks like the figure of a little girl looking back at me. I swear I didn't see it when I took the picture, but now I can't get it out of my mind. I can see it as I write this now. Even at my home in Jackson, 20 miles away, I still get that eerie feeling ever since I took that picture. I have always been curious about the supernatural and have felt that I sometimes feel a presence, but never anything visual until now.