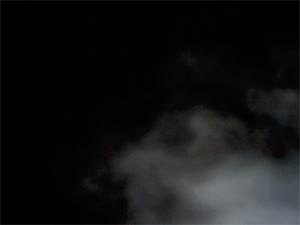 My family was visiting at my mothers house in Hibbing. While the kids were upstairs with my mother, myself, and my girlfriend went to the basement and took some photos with the digital camera just because my mom has told me about a couple of little things that have happened since she moved in last September.

There were actually three areas that we could "feel" energy, the laundry room, the furnace room and a portion of the living room area all are in the basement which is finished off.

When we got home we immediately fired up the computer and started looking through the 68 pictures that I had taken both inside and out of the house. This was a shot that was taken towards a large pine tree by the driveway. This shot is very dark as it was a cloudy night and the tree was a bit far away for the flash. I had just put all the kids in the van and my girlfriend was in the van and all doors were shut. The van was not running since the keys were still in my pocket. No one was outside breathing and there were no other vehicles around to produce exhaust. There is also no sewer drain close by that could have caused this to appear. I simply can't explain it.