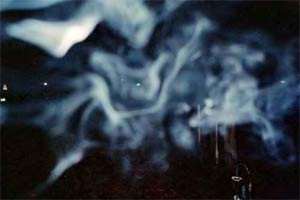 This photo was taken in October 2003 in a very old (1700's) grave yard on the south side of Indianapolis. I took five photos and all were exceptionally normal except this one. Talk about scary! This grave yard is right off a city street as you can notice the street lights in the background but they were far away and it was dark where I was standing. There was no traffic because it was 2:00 A.M. and it was a clear night with very little wind and no precipitation. I used a Kodak disposable camera with 35mm 800 speed ASA film. After seeing this picture I decided to end my ghost hunting career before it even started!