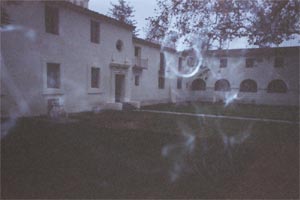 This is one of the places rumored to have inspired the song "Hotel California" by the Eagles. Camarillo State Mental Hospital, which was closed during the Reagan years, is now used for location filming. My brother, Bill, while on a location shoot, was working out of this building at the asylum just last May 2004. He's a set builder. While there, little things like the hammers, wrenches, etc. would disappear and then reappear in other rooms. Windows would shut, microwaves thrown on the floor, the walls would knock, and cold spots happened. They would hear children laughing, but no kids were there. A couple of the crew quit -- it was too close to the other side for them. My brother took this picture at the start of a work day about 5:00 AM and this is what he got. The crew nick named this ghost "Pipes" as it loved rapping on the pipes to the point where the walls would move. I guess this is a picture of "Pipes."