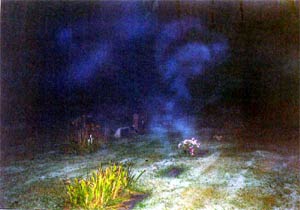 My boyfriend, Dave, and I enjoy our hobby, ghost hunting. This picture is from Chesterland Cemetery in Chesterland, Ohio. We had no knowledge of any paranormal activity when we decided to investigate it. We decided to see if we could make contact with his late friend, Steven. The night that this picture was taken it was very clear out with a temperature of about 69 degrees. We were using a 35 mm. camera with 400 speed film. We were about 20 minutes into investigating around the cemetery when it sounded like someone was walking behind me. By this time I was getting a little scared and yelled for Dave. He decided to snap a picture from where the sound was coming from and this is what developed. We have since been back many times to this cemetery and have had many photos with orbs and mist present, but this by far is the best depicting what looks like the beginning of an apparition forming out of two gravestones. (These two headstones are also placed next to Dave's late buddy, Steve.) We have had the negative examined and there is no explanation for what anomalies appear on our film. We do definitely believe that Chesterland should have a reputation for being haunted and we are going to start looking into the history of the cemetery soon.